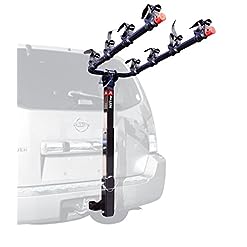 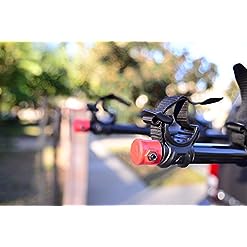 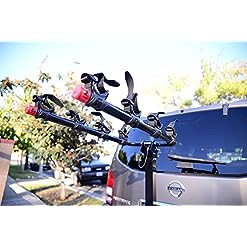 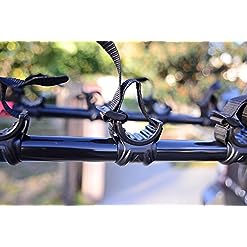 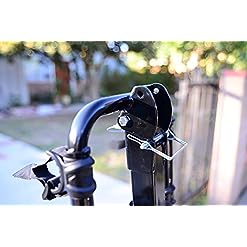 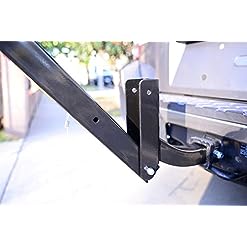 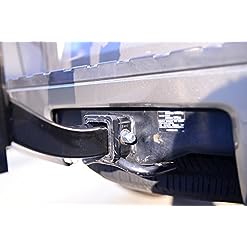 Product prices and availability are accurate as of the date/time indicated and are subject to change. Any price and availability information displayed on [relevant Amazon Site(s), as applicable] at the time of purchase will apply to the purchase of this product.

4-bike rack fits vehicles with a 2-inch trailer hitch only . Vehicle will require professionally installed Class III or IV 2″ hitch to use this product
22-inch long carry arms individually secure bicycles with Allen’s patented tie-down system
Folding carry arms quickly drop out of the way when rack is not in use

🎁 Shop Amazon - Give the Gift of Amazon Prime

The Allen® deluxe 4-bike carrier mounts easily, quickly, and firmly to your car or truck’s trailer hitch. Allen’s® patented cradle system uses snug tie-downs to secure up to 4 bicycles. When not in use, the carry arms fold down, and the entire rack tilts to allow access to the lift gate. The powder-coated rack installs in just minutes with a no-wobble bolt that eliminates dangerous movement within the hitch. Easy assembly required.
Carry your bicycles securely and avoid the hassles of piled bikes or high threshold rooftop mounts, with the Allen Deluxe 4-Bike Hitch Mount Rack. Fitting vehicles with a 2-inch trailer hitch, the Allen Deluxe Hitch Mount Rack is both easy to operate and super secure for your bikes. Constructed out of steel with a durable black powder finish, the rack is built to last and is backed up by a lifetime warranty by Allen.

The Allen rack boasts a patented tie-down system and individually cradles up to four bikes in the 22-inch carry arms. As easy to install as it is to use, the rack sets up in less than 5 minutes with a no-wobble bolt that holds it still within the hitch. When the rack is not in use, the carry arms quickly drop out of the way and fold down flat with a patented single pin mechanism and the rack tilts up to allow easy access to the lift gate.

About Allen Bike Racks:
In 1967, after a few years of working on the aerospace technology for the Apollo missions, Dick Allen was out of a job. Government cutbacks led Allen, a Harvard-trained physicist, to transform his garage hobby into a new industry. A cycling enthusiast, inventor, and family man, Allen had a personal need for a bike-carrying device. On weekends, he would take his sons and wife to Cape Cod or the White Mountains of New Hampshire. What proved difficult time and again was the transport of his family’s bicycles. Rather than fight through inconvenience with twine and a dinged car, Allen sought an answer for himself as well as a market in which he foresaw major growth possibilities.

Always a pathfinder, Allen took to work in his Lincoln, Massachusetts garage in search of a more efficient way to transport bikes. Drafting designs during the day and constructing them throughout the night, he put together a model made of electrical conduit, metal strapping, and fire hose casings (for padding). At first, the Allens tested the prototype on weekend excursions. Finding the first trunk-mounted rack to be a success, Dick started Allen Bike Racks. Dealer acceptance came quickly, and by 1971 Allen Bike Racks were sold nationally through a number of major bicycle distributors. Today, the company owns over three-dozen patents and offers a versatile product line of bike racks while Dick’s son Alex now owns and operates the business. What started out as a small garage run operation now operates three warehouses nationally, two factories abroad, and has products sold in more than a dozen countries around the world.

4-bike rack fits vehicles with a 2-inch trailer hitch only . Vehicle will require professionally installed Class III or IV 2″ hitch to use this product
22-inch long carry arms individually secure bicycles with Allen’s patented tie-down system
Folding carry arms quickly drop out of the way when rack is not in use
Rack sets up and installs in less than 5 minutes
Sturdy steel construction with black powder coat finish; Lifetime warranty
NEVER use on trailers or front of vehicles